The executive members of the ‘Underground Committee©’ was on camping mode since Friday upto Sunday(today) in the north of the Island at Mont Choisy, well not only Mont Choisy infact, you will learn why in some seconds…

We finally ended the camping at Pereybere, in a luxurious bungalow, compared to the first one at Mont Choisy!

After the quarterly meeting of DCDM Consulting, we (Bernard, Michael, Rama, Krishna, Richard, Nisha, Vana, Vero and myself) met in Mont Choisy in a ‘bungalow'(siposement, dimoune appelle sa campement!)…

That thing was in ‘etat pitoyable’, lets describe it in note form lol!

btw, that disgusting thing which some people called bungalow/campement is also known as Campement Rajkoomar!

Nevertheless, we did not have the choice but to remain there, since it was already about 9pm.
After a kfc dinner, we started to try to forget what was around us by taking some drinks while i was installing my desktop pc and my audio equipment so that a Karaoke session could start.

Very quickly, we started to make loads of noise, even if most of us had some fear, growing more and more! 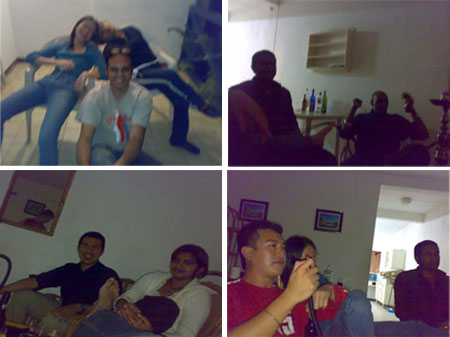 In the middle of the night, we heard a water flowing, thinking that it was coming from the toilets… However, after a quick check, the sound appeared to come from upstairs!

Bernard, Mike and Rama courageously went up the stairs to discover that water was overflowing in the water tank/bathroom, myself dont remember lol! It was very strange koz no one of us actually went there!

In fact no one of us dared to go alone anywhere in the house!

This incident was like a shock to all of us, and we took the firm decision to look for another bungalow for the next day!

At around 4am, we all went to sleep in the drawing room (salon) on 2 mattresses (beurk!)

I woke up at around 6am, and took the car to buy fresh bread and some ‘gato piments’.
The others woke up a bit later, and had their ‘baguette and gato piments’ ready….
After our breakfast, while some of us watched a film on the pc, others went to look for another bungalow, anywhere!

We wanted to move as quick as possible from this place!

Packing things before moving out…

A few hours later, we packed up and headed to Pereybere where we hired a nice bungalow for a night…

Arrival at the 2nd bungalow

Most of us nearly kissed the floor lol, on the sight of a clean bungalow, with nice mattresses, chairs, clean walls.

It was the nicest thing that could happen at that time!

We slept a bit during the day, and we had dinner at Luigi’s in Grand Baie…

Back to the ‘heaven’

At 10pm, we reached the bungalow where we drank even more, while playing dominos till 4am…

The next next day

We took our breakfast at around 10am, and at 1130, we were already on the road, back home, after a supernatural camping night, followed by a peaceful night in the 2nd bungalow…

Packing again, the final one!

Everything has an end, and tomorrow, we will be back to work, just like everybody else, but the difference is that, we will be telling others about our 2 nights camping, without forgetting the frightful night in ‘campement Rajkoomar’ at Mont Choisy!

The whole set of the Underground events can be accessed here…