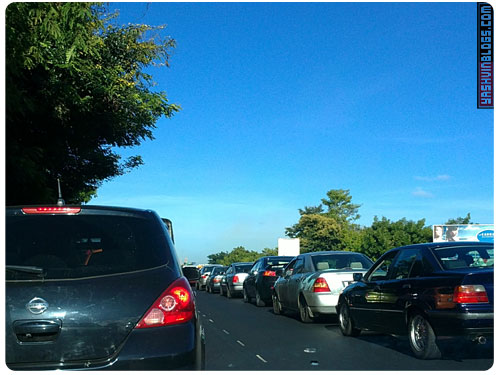 With a few of my colleagues residing in the same village, Triolet, we regularly talk about the daily traffic along the different routes we drive to office.

The use of lanes on the motorway is very often among the subjects we discuss. Regularly, despite two of us cross each other at some point on the road, there’s always a few minutes difference on reaching the capital. Speed is definitely not the reason at this peak time of the day. We noticed that driving wisely can actually be of great use, accounting for a large majority of the time difference and also, it might help to effectively control your fuel efficiently at the same time.

Anyone made that observation too? Personally, I found that the flow of vehicles on the left lane is more fluid in traffic jams most of the times. Another factor determining the fluidity is the presence of police traffic officers on roundabouts. Generally, vehicles on the left lane go more smoothly if there is no traffic officers regulating the traffic in these places.

With no traffic jams ahead, it is without doubt that the fluidity is better when you drive in the fast lane (right). And for god’s sake, please get off the fast lane when you are not overtaking! An important point to note : The existing law is being modified to re-inforce the regulations concerning the use of the fast lane. Soon, the fast lane will be strictly used  for overtaking vehicles only.