With very little credit available on my Orange mobile, I created a new SMS to be sent to the top up service of SBM to recharge my credit.

At around 9am, I was bombarded with SMS from Orange. 14 to be exact.

The last message was as follows : 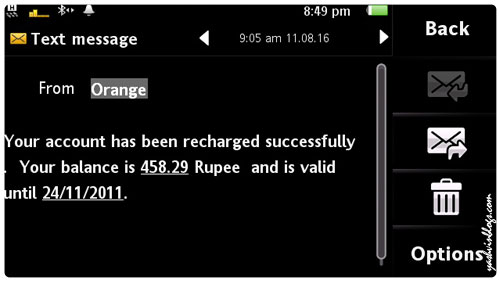 I immediately called Orange Customer Care and complained about my account being recharged 4times. At first, the agent thought that I was a #noob. No need to say to whom I am referring to here. (Anyone?)

I explained everything again and again until she finally understood the context and logged a complaint. Time : 915am.

Later on, I learnt that I was not the only one who encountered with similar problems. “Failed” sms in the outbox were in fact successfully sent and received at the other end.

For instance, Mantasha PROBABLY paid 12 times more for the message she sent me only once but which I received 13times.

And guess what? She will learn this “super tricherie” and bug on Orange, ONLY when she reads this line. But as usual, it will be too late.

#FAIL : ORANGE seems to be an unlucky color nowadays 😛

Did you get the same problem recently?