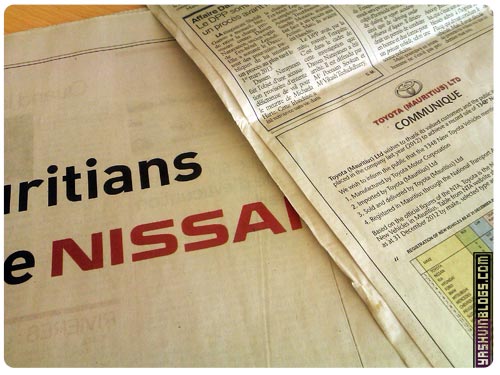 Nearly one month ago, you probably came across confusing adverts, du déjà vu in the sales of motor vehicles. Both Nissan and Toyota were claiming for having recorded the highest sales of vehicles for the year 2012 via their respective representatives ABC Motors and Toyota (Mauritius).

The 100% “official” of the official figures…

Finally, the MVDA came up with an official communique today, showing Toyota at the top of the list for the year 2012:

And for those who want the complete list *Please note the remarkable sales of Kia while Honda is nearly at the bottom*:

Strangely, none of their numbers have exact matches. On the other hand, will Nissan try to counter attack or it will just keep calm about their marketing campaign? And  finally, can we expect the NTA to come up with a communique? I don’t think they will ever bother, especially after being so careless the last time they emitted communique in regards to the introduction of the yellow licence vehicle plates, previously fixed for 1st July 2011!

Update: Dinesh R, a friend reminded me of this fact: some days back, ABC Motors removes itself from the MVDA. Hehe, surely something cooking in there. Sounds fishy.