The increasing number of vehicles on our roads has made the situation worse. Over 350,000 vehicles in our small island. Can you imagine? But what makes you even crazier is the traffic jams while heading to and from the capital.

A series of new roads have been announced to alleviate this traffic problem : The construction of roads/lanes will only shift the traffic jam right at the entry of the capital. They have been talking of the “metro-leger” project and bus lanes since years. Yet, nothing for now.

At some point in time, there was some talk going on about making a “Péage” system to enter Port Louis. According to them, this will encourage people to use the public transport system, which is frankly unreliable and uncomfortable. (Remember the post about Cockroaches in buses?) We can also add “unsafe” to the list, especially with some CNT buses recently in the headlines after a few accidents caused by brake fails and also, when a piece of the bus flew right into a car, killing the driver.

Now, let’s come back to Car Pooling. You should first get the picture of what I am trying to say :

You are stuck in a traffic jam. You notice loads of vehicles in which the only person is the driver.

You have most probably witnessed this scene several times. If you happen to see 4-5 of them, they are not only occupying 4 additional spaces on the road, but also, 4 additional parking slots in the city. Since all of them are heading towards the same destination, a single car could have been much more appropriate, economical and less painful for other road users. 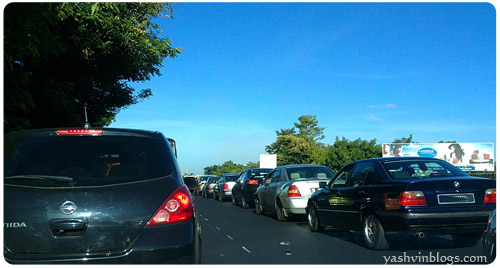 Okay, I am not asking to fill every car up to the maximum capacity of 5-6 people like those large overloaded taxis mostly from the eastern region . We should be realist. Car Pooling can only be advantageous in every way. Nothing is wrong in sharing your car (and the cost) with your neighbours or friends who are also travelling to the same destination :

Bus services cannot really complain about this practice until they offer a good and reliable service. Many people, including myself, rarely travel by bus for the same reasons mentioned earlier.

The government should encourage car pooling but it is unfortunate that the people at the head of the authorities never thought of this idea because who would even think to share their population-paid Mercedes or BMW car with somebody else?

btw, do you (or are you willing) to do car pooling with your surroundings?

What do you think?

30 thoughts on “Can carpooling reduce traffic problems in Mauritius?”