When I came across the groups (1) Dads of the North and (2) Mums of the North on Facebook, I noticed big differences in the way they operate and the content posted. The idea of joining both groups to write about these differences then cropped in my mind. Nothing mischievous, I promise. Names, pictures and any contact details have been carefully masked in all pictures in this blog article.

Dads of the north :

Do you feel a little left out when your wife says “Honey I found a great rice cooker for sale on mum’s of Mauritius!” ? would you like to have a reply such as “Oh darling that’s great, but look at this boat I just found for sale on Dad’s of the North, or don’t you like my new power tool (no pun intended here) I found at a killer price?” Well if you do then this page is for you to ask, post, share, buy and sell many things, no rice cooker allowed here!

Mums of the North:

Comment : As you have surely noticed, the second description is straight-forward. No need to write several sentences to explain the purpose of the group. Special care is taken to warn members about the content posted. 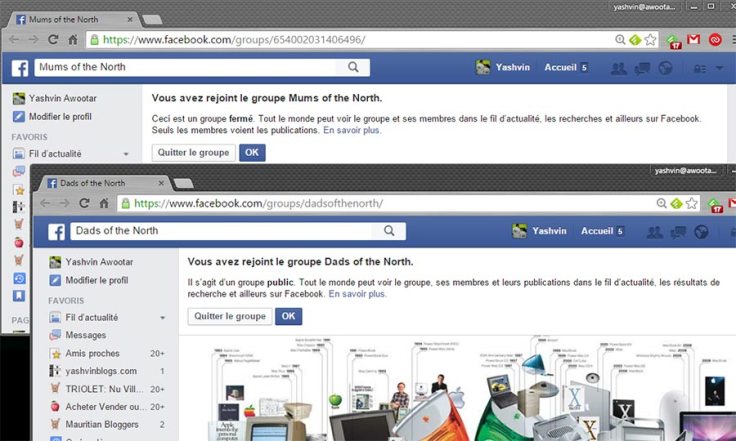 Being a public group, membership requests can be approved by any existing member in the Dads group. Also, you might want to join in only if you want to post something since the content are publicly visible to anyone on Facebook  However, since the mums are in a private group, only an admin can approve the request. So, it might take a bit longer to be part of the mums. This can also explain the number of members in both group. With practically no control over the dads group, the number of members reached over 3000 while there are only around 1100 members in the other group.

Interesting point to note is that once your membership is approved to the mums group, the admin tags you in a post detailing the basic rules of the group. New members are also required to “digitally-sign” by liking and commenting on that specific post. Quite interesting technique I admit but however, I wonder if new members will be kicked out if they don’t like and comment on that post.

If you are joining these groups, I think that most of you will probably expect to find relevant posts on parenting. These posts can be in the form of tips, advice on specific topics, solutions to common problems faced by mums/dads, the to-do’s and not-to-do lists etc. If properly managed and used in a responsible manner, these groups can become a great platform to share information in-between parents. Looking for a baby-sitter for the night or a pediatrician in the north can become easy and quick.

So, I was glad to come across these types of posts while scrolling the Mums group : 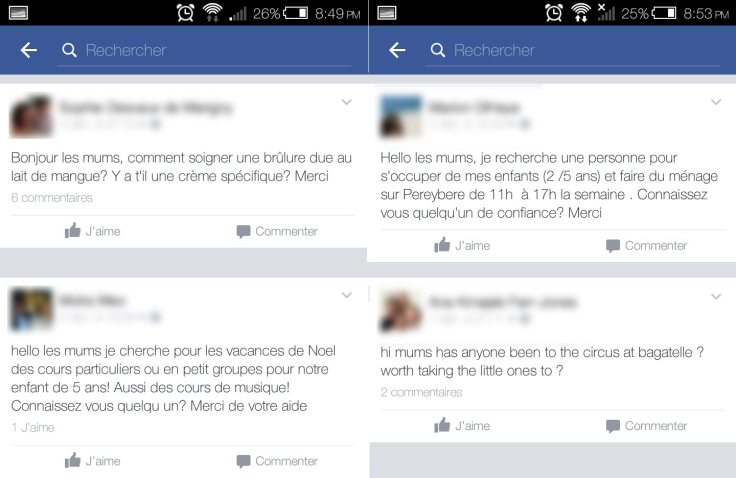 These groups can also be useful when parents need to sell or buy products that babies and kids usually use. For instance, if your kid doesn’t need baby-walkers or car seats anymore, it can be profitable to sell them at a cheaper price and also, free up some space at home as these items can really be cumbersome. The mums group contain several similar deals across the page while on the dads group, these type of posts are quite rare :

Coming to non-parenting related posts, you can find them in both groups but there are definitely less posts in the mums group. For example, you can stumble on a post whereby someone selling her pair of sandals or a car that she has driven :

However, in the dads group, over 75% of posts are irrelevant. These posts are invasive all over the group. For example, someone selling his / her car and posting the same thing over and over again (probably till the vehicle is sold!)

Bref, you can practically find anything in the dads group : Car renting, restaurants menus, real-estate adverts and even job vacancies!!! Without a content approval process ( or strict rules), the dads group is a real mess :

Despite that the names of the groups respectively contain “Mums” and “Dads”, the membership is not limited to the gender; Dads can join in the mums’ group and vice-versa. I wonder if the dads group was created to complete with the mums but the admins and members have lost a very good opportunity to make something great.

The use of Facebook as a commercial platform is growing fast and working very well. Any medium is good to make business but unfortunately, some people and companies spoil the fun of having such groups. I did come across several members who posted the same adverts and items for sale in both groups simultaneously. And without an approval process, this can encourage people to post anything, from illicit pictures to racists comments.

I hope that people behave more responsibly and become mature over the content they post in groups. To end, big thumbs up to the whole online community behind the “Mums of the North”.