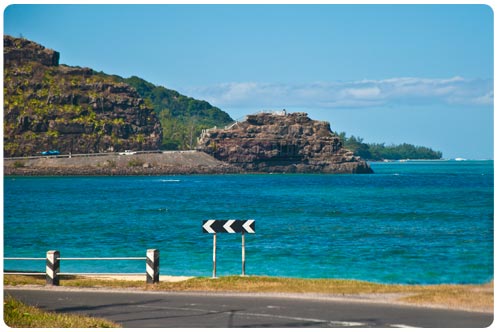 While driving along the south western coast of the island yesterday, I came across a hawker in Macondé, one of my favorite areas in this region of the island. After drinking some coconut water to quench my thirst, he invited me to taste his fruit salad, he named as “Salade Rouze”. As per what he said, people also refer it to “Salade Weekend” because many among them drive to Macondé along with their family members to have it during weekends.

While I was expecting him to hand over one of his products displayed on his shelves, he opened the large white box (above), full of some red-colored “material”, frozen in ice. When he handled a piece of it to me, I kindda hesitated at first. But when he kindly insisted that I should at least taste it, I picked it up and put it in my mouth.

With a smile, he then asked me if I had any idea of what I just ate. Though it was cold because of the ice, I could distinguish something like pickled mango accompanied by another sweet flavor. One thing for sure, it was definitely the first time I had something like that.

When he announced what I actually ate, I just nodded and probably had one of those surprised looks.

Damned! He just made me eat chouchou! SOUSOU!!!

That’s something I actually eat only in hindu weddings and nowhere else!!!

He explained that he prepared it using pickled chouchou (sousou confi) and also pieces of frisitaire (Fruit de Cythère = Hog Plum. Thanks to @Carrot and @Nirvan). Then he prepares some sort of syrup made up of strawberry and sugar to give the sweet taste. Finally, he freezes the mixture. After the gato merveilles, this is definitely something you need to taste at Rs25 per glass serving (as shown in one of the pictures above)

And if anyone has any additional info to share, don’t hesitate. But please, I had one glass full of the salad and truly enjoyed eating it, so don’t say anything to make me regret those moments.

Bon weekend to all!