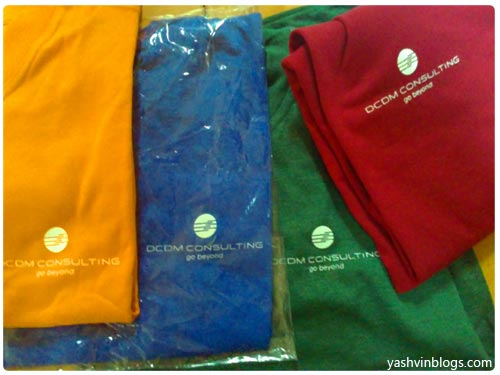 Officially, this day has no-name yet but I decided to call it “DCDMC at Mont Choisy”. or the “A day by the seaside” as you wish. Anyways, Shakespeare said “what’s in a name” but what he did not know is that all I needed was a blog title.

Not much information was leaked about this special day. Tshirts were distributed one day before the event (i.e. Thursday) and planning for transport was mailed to everyone at the same time.

We only had to be at Mont Choisy at 9am and as you can guess, there were late-comers, including myself, since I travelled by bus, again.

Once out of the bus, I walked along the seaside to look for the event’s spot. I came across a film crew who even wanted to stop me from passing. They had no right, so I just walked right in the middle of their frame. That’s typical of me. Just then, I spotted the tents at the end of the beach, and I did some jogging till there.

Once most reached the beach of Mont Choisy, the company event started with a warm welcome from Hassen Rojoa, our host while breakfast was served. A few games were scheduled to start just after. Among them : Sac A patate (Ou “sag gouni” as said in creole), Running with SwinFins (“La patte canard”), Throwing balloons (filled of water) and a few other games.

And of course, the Kayak race, which the red team lost, as in most of the other games. But the fun and the team spirit was there, especially in the balloons game where the 2 teams had to throw a water-filled balloon at the other team and the winning team is the one who catches the most without exploding them.

Lunch was served at 1330hrs and as you can guess, everyone was hungry at this time. Au menu, we had BBQ (Grilled chicken, lamb, fish and lobster).

Hassen Rojoa was great, as usual. I don’t think that anyone can complain about our host. He knows how to make people laugh. Entertainment is what he does best. The games and the mini concert were cool too.

However, I say it loud and clear (and again), don’t ever hire that amateur so-called magician. I am not among those who silently endure all kind of tortures, including silly magic shows. So, people who were out there, you should thank me for making that guy disappear from the scene, with my own magical words.

I had a nice time. Despite being out of office for this day, we were still among colleagues for the whole day. Nice time for some team building and getting to know each and every person of the company.

There are things which can always be improved but nothing is perfect in life. Three and a half years ago, the company organised a similar event at Flic en Flac. You might be interested to read about it here.

Oh gosh, I nearly forgot the beer. At around 13hrs, we had an “Out of Stock” warning. Fortunately, more beers were ordered to satisfy all those thirsty people who came to have a nice time among colleagues.

And we drank till the end of the day, on the beach and in the sea too 🙂

4 thoughts on “DCDMC at Mont Choisy”