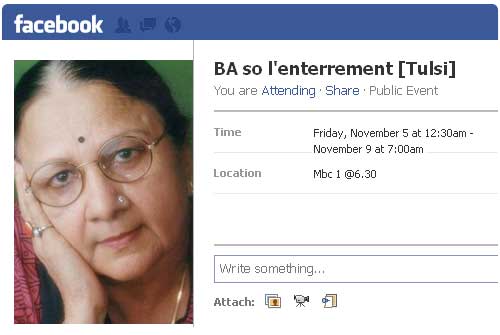 For all those fans of “Kyunki Saas Bhi Kabhi Bahu Thi” who abandoned watching the serial during the lost years, it is with enormous sadness that I announce that the famous “BA” will no more be seen on tv.

A few days ago, we learned with deep regrets the death of BA Virani who passed away last thursday, 04 November 2010, in the familial house, Shantiniketan during the daily broadcast on MBC1. The funeral ceremony will take place in the old Shantiniketan house in the coming tv broadcast, scheduled for Tuesday 09 November 2010. The time will be communicated later since it depends on the amount of tv adverts to be broadcasted on this special day.

The 104yrs BA Virani is not only the oldest of all grandmothers ever existed in bollywood serials (4-5 generations) but she also survived numerous stages of the exciting and repetitious life as the eldest and most respected person of the Virani family. She has been dying slowly since years but very recently, she started to have premonitions and allucinations. Signs of her last days were evident since she kept hallucinating things, talking to herself and kept seeing her late husband. A few days before her last breath, she also requested her family members to bring her back to their old house so that she can remember those old times (in fact, they had loads of houses through the years).

The final minutes of BA on screen :

On this sad day, I have the honor to share with you this video in which BA takes her last breath…

A facebook memorial page has also been created for this event and over 1000 facebook members have already planned to attend the ceremony, glued in front of their tv sets.

We join to the whole thousands of addicted Mauritian tv spectators to transmit to Tulsi like to the whole Virani family and to the friends, our more sincere condolences.

Yashvin
for http://www.yashvinblogs.com on this 07 November 2010.