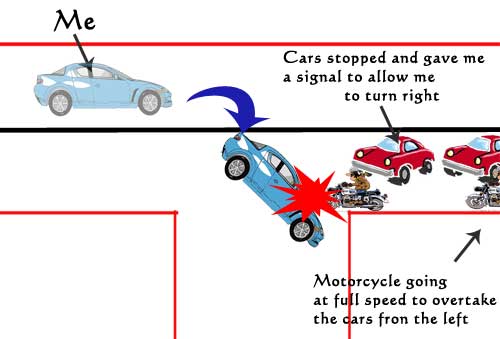 After spending a superb night camping in Flic en Flac with Nitin, Vissen, Elie, Ashley, Charles and Yash, I woke up at 10am and decided to return back home. I was feeling sick and could not stand the sight of bottles anymore.

So, I drove back home and on the way, I dropped 2 of them in Port Louis. And right in front of “Cinema Anand” in Triolet, a motocycle hit the side of my car while I was turning to my right. The picture below best describes the accident.

The motorcycle came out from nowhere and crashed right into the front passenger’s door of my car. I stopped the car immediately and got out to see what happened. Fortunately, the rider got up and was not hurt. And at that moment, I saw his police uniform on him. Yes, he was a police officer and he was overtaking other cars from the left…

Then, I parked my car a few meters away to discuss what we should do. My car did not get any scratch but his motorcycle was a bit damaged. I explained to him how he was at fault by driving in that way. He kept his mouth shut and asked me to accompany him to a garage to get his motorcycle repaired. I told him that I was not going to pay a cent from my pocket and if he wants, we can do a “Constat à l’amiable” or file a police case. We met in the police station where he refused to do an agreement between us.

We got into a police vehicle and went to the accident spot for marking the point of impact. The rider (police guy) tried to give another version by marking a different point of impact so that he could trap me. I clearly said that it was much far away and the proof : Fresh traces of petrol could be seen at the point where he crashed into me and he fell off his motorcycle.

Then, we got back to the police station and after some 30mins, he sent another officer to tell me if I would agree to go on with an agreement (“Constat à l’amiable”). I said yes and finally, the guy decided that it was not so serious. I am sure that the reason behind this stepping down is that as a police officer, he knows that he will lose the case.

He told me that he is cancelling the case and there won’t be any need to do any agreement. Before I left the police station, we both signed in the diary book to set everything on paper.

#FAIL and Shame at you, driving your 2 wheels carelessly despite being a police officer!

Sure, I lost nearly 2 hours today but at least, this accident gave him a small lesson about how he should be driving 😛