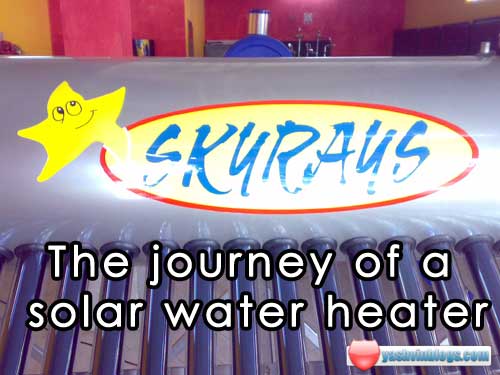 Everything started with an announcement by the government about a Rs10,000 grant to each family for the purchase of a solar water heater in the process of making the  “Ile Maurice Durable”.

At that time, the solar water heater was probably only some pieces of metal sheets. But at home, we wanted to give it a better life, for the coming 10-20 years…

In mid December 2008, we went to the branch of Skyrays Solar Water in Triolet to inquire how we could help to make a Green Mauritius. We finally opted to take a 220L solar water heater which was at around 23k including the 10k of the govt. Loads of paper work was done!

After nearly 4months, we got the approval letter from the Development Bank Of Mauritius, hourray!

By this time, the metal sheets were perhaps already molded into a nice solar water heater, which took nearly 2 months to reach our doorstep.

A few days ago, we got the confirmation that the delivery will be made today.

At around noon, I headed home since the guys were already there for the installation.

wow, after a few minutes on the roof, I felt like being roasted under the burning sun!

Fortunately they took only about 1 hour to complete the setting up, after which I returned back to Champs De Mars.

Goshhhhhhhhh, we will have to wait a few more days before getting hot water since the piping still needs to be done.

As you can see in the pictures above, we already had a solar water heater, which stopped working around 1999. The most amazing thing is that the solar water heater was blown away during the Hollanda (1994) cyclone!

An electric water heater replaced the old solar one for some years.

After some short circuit problems, a gas water heater took its place for a 1-2 years.

This gas water heater had undergone a minor explosion a few months ago, which left us with cold water!

I forgot to mention, this new solar water heater has even electrical connections built in!!! How it works? I forgot lol!

Did you get yours?

Initially targeted to be valid until December 2009, the fund allocated to the solar water grant scheme was exhausted a few days ago.

So, if you missed this free gift of Rs10,000, you will have to wait for the next offer!

btw, did you got hold of any of the siblings of our solar water heater?

22 thoughts on “The journey of a Solar Water Heater”