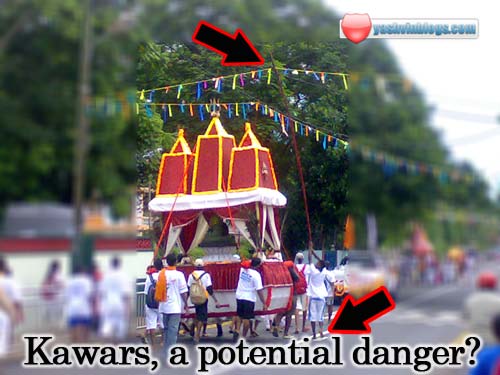 I find that some people  exaggerate too much while building their “holy” kanwars for the Mahashivratree festival.

You have surely noticed that many kanwars are much larger than standard cars and much heigher than electrical cables on the streets.

I won’t deny, they are indeed beautiful, but have you ever thought about the danger of carrying these things on the roads?

Did god mentioned somewhere that you achieve your “pilgrimage” only when you carry the biggest kanwars to Grand Bassin? 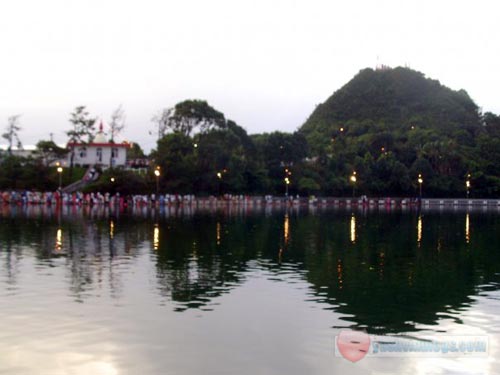 Have a look at the following picture:

This scene is very common, you can surely see this everywhere.

Some 2 or 3 years back, I had set “la pagaille” into my neighbourhood, lol!

1 or 2 weeks had already elapsed since Mahashivratree but a group of persons left their big kanwars on the side of the road, just like that…

For me, it was an unacceptable thing because

In broad daylight, I went there and took some posters with me, in which I wrote:

“Depotoire ici” (Dumping area here) or things like that.

lol, I came back home, and a few hours later, the area was cleaned! haha!

Believe me, since then, no one dares to leave their kawars abandoned!

With the increasing number of huge kanwars on the road, the risk of accidents and the probability of having traffic jams are on the rise. 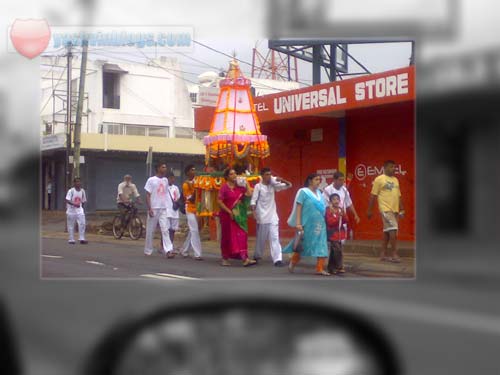 Do you think its time for the authorities to set some standards for the size of kanwars?

Just imagine, what if all the kanwars were small?

Loads of people would actually be frustrated, specially those “religious” organisations.

Naturally, the government will never go for such standards, since this will definitely make most(?) the hindous hate them!

Very bad for political parties when the majority of Mauritians are hindous.

[UPDATE : As one of the readers(Roushdat) mentioned below, this article seems to be written by a Mauritian Hindu Priest.
Can someone please send me his name if you are aware of this? Thanks.]

Maha Shivratree should be performed in a spirit of sacrifice, otherwise it would be adharmic (religiously incorrect).
[…]

It’s high time to change our excessive attitudes and adopt a sustainable mindset in this religious realm. […]

But I ask myself, when will we change?

67 thoughts on “Kanwars, a potential danger?”