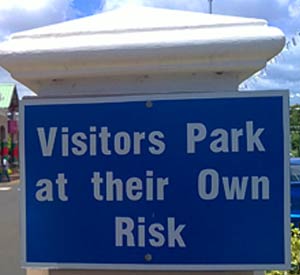 Have you ever spent a minute reading and understanding what is usually written at the entrance of your favorite hypermarket or shopping centre’s parking?

Most of the time, nobody really pays attention to them, unless something bad happens, really bad. Like someone forced into your car, stole your personal belongings or even, your car vanishing into the air. Just like it happened very recently in the Bagatelle Mall of Mauritius.

Today, I was quite stunned with a rather ‘detailed’ notice, posted in the new mall at Cascavelle.
*You can click on the image below to enlarge*

Does that make you feel comfortable to shop in here? Most importantly, the following sentence :

All persons entering these permises do so at their own risk and peril.

Question : Why would Person X prefer to shop at ABC Shopping Mall rather than to buy those same stuffs in Port Louis for example?

There might be many reasons but I believe that some of them are :

I fail to understand why shopping malls and other hypermarkets etc cannot really ensure that their environment is safe. That should be their main concern. Advertising about your shops etc is not enough. Show how your mall is different from streets.  How can they invite people to use their billions-invested complex with a peace of mind when they cannot give a guarantee that THEY should feel more secure than on a street?

This said, I have been to Cascavelle today. If you have been to Bagatelle, that’s it. Cascavelle is just its miniature-like sister, but with a large “entrance disclaimer” notice, probably to prevent people suing them in case their cars get robbed, too.

Update :
Just to give you an example, I shot this one in the parking at Cascavelle. 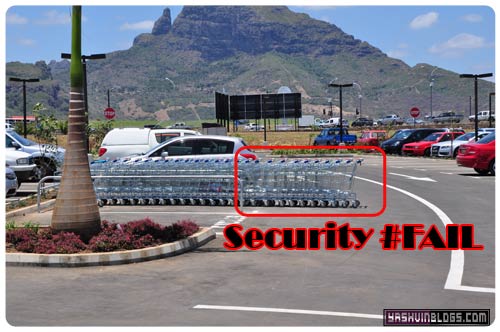 Who is accountable in this situation in case some car collides with the Caddys or one of them happen to leave the non-caddy space?

31 thoughts on “Disclaimers in shopping malls, hypermarkets among others…”