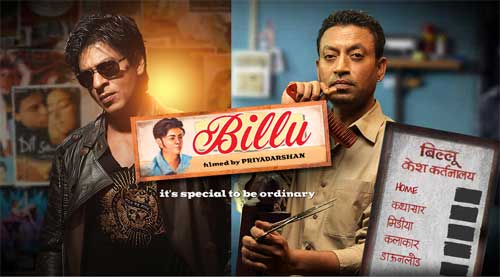 On this special day, Dhaneesha n myself went to the cinema to watch the newly released bollywood movie “Billu Barber” at 18hrs in Star, Caudan.

Don’t worry, I will not reveal the whole story to you.

As his name suggests, Billu is a barber(hair cutter) of a small village, and his shop is nearly empty.

One day, Shah Rukh Khan (a superstar) decides to shoot some scenes in this village.

Irony with the arrival of the president of the people’s republic of china.

So, loads of security is set up in the village for the safetly of the superstar.

On his arrival into the village, all roads are closed, lol, hundreds of people on the streets shouting out his name since its the first time such an event is taking place in this village. Loads of cars follow the vehicle of the actor, police officers preventing the villages from approaching the actor.

During these scenes, I made Dhaneesha laugh during minutes since I was comparing the security set up with that planned for the president’s arrival.

I guess loads of Mauritians will also be on the blocked roads to see the president passing by along with his 52 cars which will be accompanying him.

Everyone is eager to meet this superstar but they are unable to approach them, until the whole village starts to gossip that Billu(the barber) is Shah Rukh’s friend. This forgotten barber becomes the most respected people of the village and gets lots of customers, support and care.

A nice film indeed, with a new, original storyboard and nice songs which makes you discover the inner and hidden part of India, merging with new trends and fashion.

Go and watch it now!

While awaiting for the (extremely, lol) detailed post from Dhaneesha, here is a small overview of our afternoon/night.

The movie ended at around 2015pm, just in time since we started to get really hungry.

We hunted for some food in the overcrowded Caudan and even in the streets of Port Louis!

After dinner, we came back to Shooters for a drink, after which I drove her back home…

Now time to go to sleep, already 1am… Got to wake up early tomorrow, since I will be having a small picnic with my friends…

Hope that your Valentine’s day was as beautiful as ours!

Have a nice sunday everyone!