Since the last weeks, there has been an explosion in the number of cases related to law and order.

Today itself, the body of the director of the Mahebourg’s museum has been discovered after his dissapearance 4 days ago.

Less than 1 week ago, a few college girls were found drunk in a college.

2 weeks ago, a drunk college student jumped out of the bus when the bus headed for the police station.

3 weeks ago, a group of people kidnapped a man and had put him into the car’s boot (coffre/box loto). But instead of opening the fuel’s tank in a petrol station, they carelessly opened the boot!

After all, human errs 😛

However, this does not imply that all of them are genuine. Indeed, many of these cases have been found to be a complete set up of the behalf of the ‘victims’ themselves.

The unfortunate thief of the Naval Museum.

Some of you may not be aware, but very recently, a burglar trapped himself while trying to get away from the Naval Museum, want to know how?

Here is the part of the mail which is being sent over the internet since that day.
[thanks to Splash n Kammal] 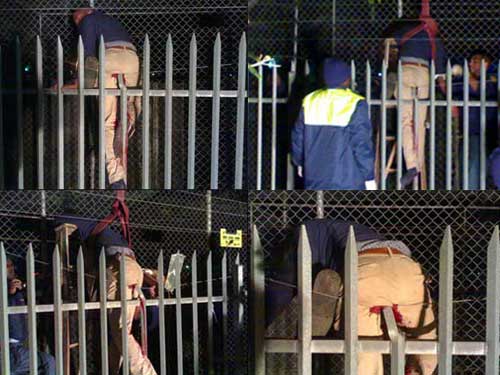 The suspect is alleged to have broken down the back door to the museum. The alarm went off, giving him a fright, and he ran away. He climbed a tree and then attempted to jump over the fence. However, he lost his footing and was impaled by one of the spikes on the fence. The man was discovered by a bus driver who heard his cries. The man was taken to J Nehru Hospital and it is understood that he is due to undergo surgeryâ€¦

Update on 28/05/09 : This information has not been confirmed officially till now.

Yes, we should call her a film director but I fear that she got only scolding in return. Aged only 9 years old, she ran away from her primary school and spent her day at Flic en Flac.

In the evening, she went back to her town and she invented a whole story in which she related that she was kidnapped, forced to enter a car and then was victim of sexual abuse.

The videos shot by the cameras of Flic en Flac were viewed by the police.

After the inquiry, it was found that the girl had been playing with tourists on the beach of Flic en Flac during the whole day.Â  She then confessed having ran away from school since her friends were teasing her and she begged to get some money to return back home by bus.

Relationship between a tourist and a mauritian woman

Everything started with a mistake while sending some texto. The tourist and the mauritian woman did not lose any time and decided to meet after only a few days. The mauritian (*who perhaps smelled money and good opportunity*) flirted with the tourist for some weeks. But when she learnt that the tourist did not want to marry her anymore, she filed a rape case against the guy.

Some thoughts from me…

The above mentioned are only a few cases, any of us can write over pages…

But who should we blame for all these?
Our society? Our constitution? Ourselves?

You may ultimately blame the government but do you believe that a reinforcement of the existing laws will solve all the problems?

I believe that each one of us are responsible for most of the happenings in this country. Unfortunately not all of us have the same objectives in life. While some are working hard to get money, others are simply sitting idle and getting allowances without any effort. (Genuine cases do exist)

Some get into drugs, and later say that they regret having done so… unfortunately after committing crimes, robberies… too late.

Put strict laws, different organisations will be in the front line to protest. Give more power to the police, there will be even more cases of police brutality.And at the end, you will hear about human rights commission…

58 thoughts on “Crimes stats on the rise in Mauritius, why?”